The Katherine Coffey Award is given each year by the Mid-Atlantic Association of Museums to an individual in the Mid-Atlantic region to recognize distinguished achievement in the museum field. The Coffey Award ceremony is held annually at the MAAM Annual Meeting and is one of the pinnacle events of the conference.

Carol B. Stapp receives Katherine Coffey Award in honor of career as educator of museum educators

The Mid-Atlantic Association of Museums honored Carol B. Stapp, Ph.D., the director of the Museum Education Program at the George Washington University, as the recipient of the Katherine Coffey Award for her numerous contributions to the field as an educator of museum educators. Dr. Stapp began her career as a museum educator at the Philadelphia Museum of Art in 1969, at a time when museum educators were accorded little professional credibility in the field. As director of the Museum Education Program since 1983, she helped guide the future of museum education for over 44 years.

Dr. Stapp has played a leadership role in the profession, serving as the former editor-in-chief of the Journal of Museum Education and on the Editorial Board of Curator: The Museum Journal, as well as a member of the Education Committee of the National Advisory Board for the National Park Service. Most recently, she was the co-author of the White Paper produced by the American Association of Museums Education Committee’s Task Force to Explore an Education- Related Core Document as a requirement for accreditation. In recognition of her commitment to the field, she was honored by the AAM Committee on Education with the Excellence in Practice Award in 2007.

“Cumulatively, through her work and the work of her students, innumerable museum visitors’ lives have been touched,” said Karen Daly, President of Stratford Hall and an alum of the Museum Education Program.

Each year at the Annual Meeting, the Mid-Atlantic Association of Museums (MAAM) gives the Katherine Coffey Award to an individual in the Mid-Atlantic region to recognize distinguished, lifetime achievement in the museum field.

About the Coffey Award

Reprinted from the Museologist, No.125

Awards for outstanding service are too seldom given by organizations of the museum profession. It is true that occasionally persons in the field receive certificates of merit, plaques and sometimes, although very rarely, honorary degrees. As a rule, such awards when given are presented by chambers of commerce, service clubs, and once in a while, by colleagues and universities.

Unfortunately, however, our own profession has rarely regarded the contribution of its own notables.

Therefore, it was somewhat unusual that the Board of Governors of the Northeast Museums Conference (now MAAM) in May, 1972 agreed that nominations from a broad area be solicited for recognition of distinctive and worthy projects within the museums field. It was also decided that occasionally, when opportunity offered, a professional museum staff member should be cited for outstanding service to museology. The award, set up by the Conference, took the name of the late Katherine Coffey (1900-1972). She was one of the outstanding museum leaders and administrators of the nation.

A graduate of Barnard College in the class of 1922, she first joined the Newark Museum staff in 1923, left and returned in 1925 to remain on permanent basis until her retirement in 1968. She was in charge of all exhibitions and educational programs and directed an apprentice-training program from 1929 to 1942. During that period the course graduated 110 young people who later became associated with the staffs of museums all over the country. Many became prominent in their profession. In 1949, Miss Coffey became the Newark Museums fourth director, serving in that post 19 years. She had devoted 43 years of service to the museum when she retired in 1968. On her retirement the Newark Museum established the $100,000 Katherine Coffey Endowment Fund in her honor.

With this background of the honor as a basis it is more clearly evident why the action of the Conference was most appropriate when it conferred the first Katherine Coffey Award upon Hanna Toby Rose in 1972, who had just retired from the Brooklyn Museum.

Eligibility and Qualifications for 2022 Coffey Award

Please send any questions to info@midatlanticmuseums.org. The deadline for nominations is August 1, 2022.

The individual that submitted the nomination will be notified if their nominee has been selected in early fall of 2022. Further details will follow. The nominator is expected to assist in editing and reviewing a press release for the eventual award winner.

The Katherine Coffey Award is MAAM’s highest honor. The following individuals have been recognized for distinguished achievement in the museum field. 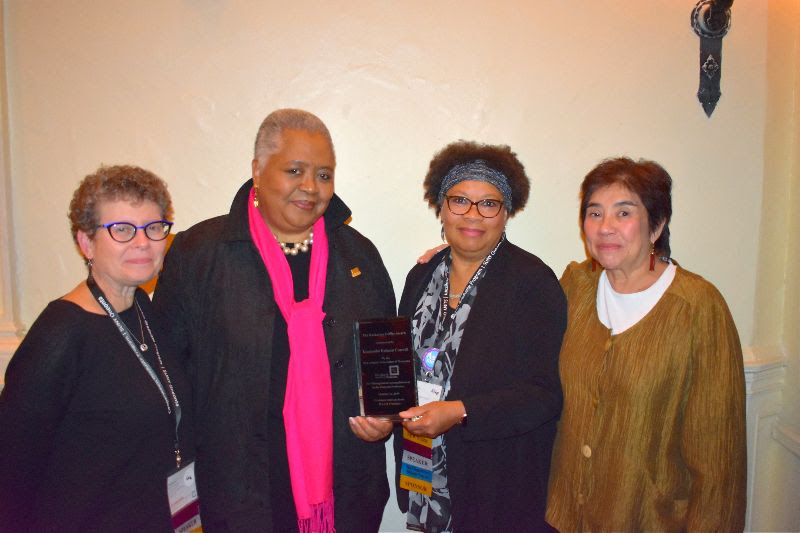